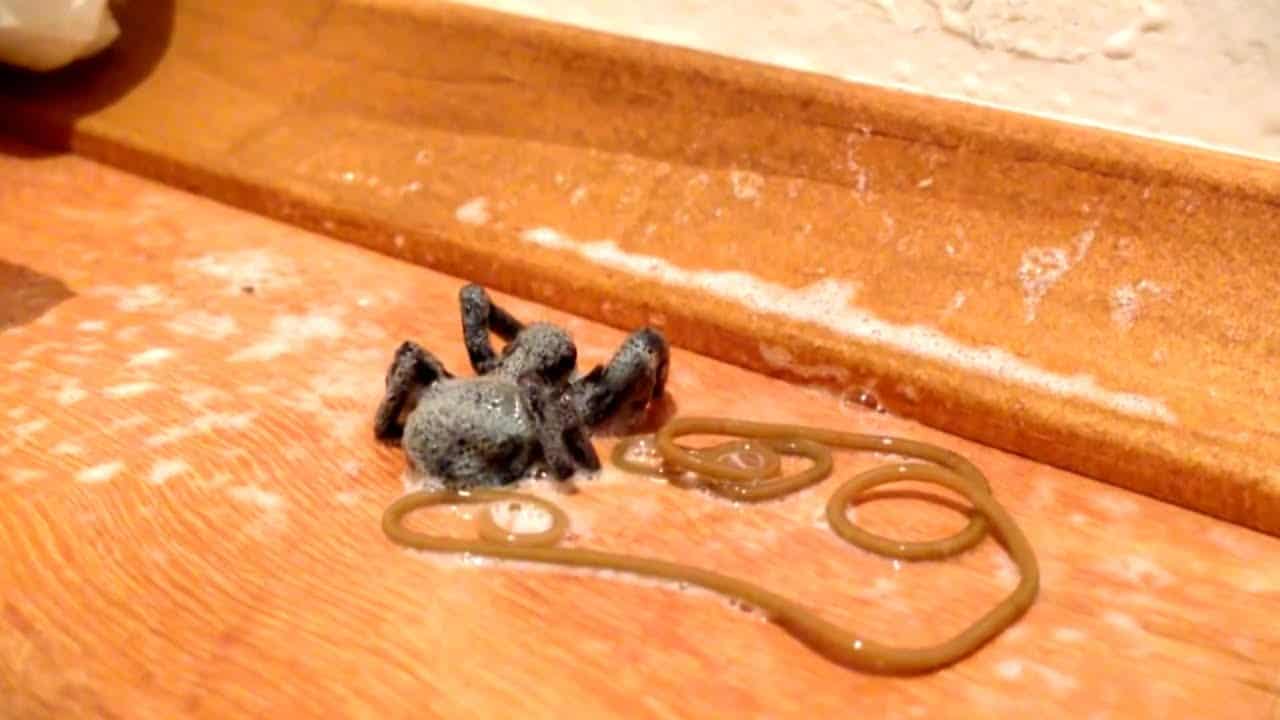 Yes, a body spray can kill a spider. However, that will depend on the composition. Certain body sprays have chemical substances that can eliminate spiders and other pests.

However, this is when the spiders are small. If we’re talking about medium to big spiders, your body spray may not be that effective.

To put things in perspective, if you see a spider that measures 2.5″ in diameter, you can spray it and get it killed.

Anything above that, I doubt a regular body spray will be effective. It’s better to look at other more effective options.

Why Is Body Spray Not Recommended?

I have a few theories about why you shouldn’t use deodorant for this job. Let’s look at a few of those:

If you have a lot of spiders around your home, trying to kill them with your deodorant will require quite a good amount of deodorant content.

Moreso, after killing a bunch, others may return after a time. Unless your body spray is extremely cheap, spraying it on spiders is just wasting it when there are other options.

Waste of time and effort.

To kill spiders with your body spray, you have to see them and spray them. Without contact, the chances of killing them are almost nil.

Unless you have a lot of time on your hands, spraying spiders, ants, and roaches with deodorant will take too much time.

There are insecticides that you just spray at one time and they’ll do their job for a while.

When you spray deodorants, you pollute the hair, especially if it’s aerosol or has heavy chemical substances.

In addition to that, you may pollute the area the spider is on, which may transfer it to other things like electronics.

Of course, this is not to say you face the hazard only when using body sprays. It could be the same when applying insecticides too.

But it’s worth counting this as part of the downsides of spraying some little crawling creatures with your deodorant.

What Are Other Alternatives?

Fortunately, there are other options you can pursue.

These annoying creatures are stubborn, so you need something strong to attack them.

Some species are venomous, which makes it even more important to get rid of them.

You can either use some chemical mixtures to kill them or go with natural substances if you like to keep things simple. Alternatives ways of killing or getting rid of spiders:

You can kill spiders instantly with some of these methods:

An effective method of getting rid of spiders is mixing vinegar with water in a spray bottle. Spray it on any spider on sight.

As long as the spray gets to them, it’ll kill them. This is potent because vinegar has acetic acid, which is disastrous to their skin.

DIatomaceous earth (DE) is an effective substance used for killing all kinds of pests. It kills them by dehydrating pests through laceration.

Grab the bottle and spread it on areas spiders often frequent. You can also place it outside the home to prevent them from coming inside.

Because this item is highly potent, you should not use it where you prepare food or where children often play. Also, clean up any traces of it outside of where you spray it for your safety.

Spiders don’t like strong scents produced by peppermint, vinegar, and certain plants. To keep them out, mix peppermint and water into a spray bottle and spray those areas where you don’t want spiders.

They’ll likely stay away from your home as they don’t like the smell of this mixture.

Cut off their Food Source

Spiders, like other pests, feed on smaller insects to survive. Cutting off their source of survival can help in reducing their number or totally eliminate them.

If you notice small insects such as ants, roaches, termites, and flies, you can eliminate them with borax. As long as these are not around your home, the number of spiders will go down considerably.

Shoo it Out the Door

Another effective way of getting rid of spiders, assuming you are not afraid of them, is shooing them out the door. You would think they hear you but they are also afraid of humans too.

So, this can be effective. You can also fan them out with a paper magazine. Be careful when doing this as some spiders can bite (although they are completely harmless).

This seems like the first thing to do. But I’m assuming you already have spiders in your house, which is what necessitates this question.

So, try the above first to eliminate them. Then you want to make sure you do this to keep them out and from returning.

The first thing you want to do is to clean up the exterior of your house. You want to ensure there are no piles of debris, plants, or dirt around your home.

The other thing you want to do is ensure there are no small openings/holes leading into your room from the outside.

Finally, keep the inside of your home clean too to keep out spiders and other insects.

Can spraying too much deodorant kill you?

Yes, if you inhale too much of it. When you spray your deodorant on insects and pests, you want to do so leaving a space between you and the object.

You also want to vacate the area after spraying it. There have been reports of a 17-year-old boy dying after inhaling deodorant spray to get high.

So, if that can be fatal, it’s better to not inhale too much especially if you have underlying respiratory issues.

Can you spray too much deodorant?

Yes, you can spray too much deodorant. It’s best if you spray moderately. If it’s not effective, it’s better to stop than to continue spraying.

Other smaller insects often attract house spiders. Most times, these insects are attracted by the light you have on your porch and other areas during the night.

If you kill or disperse the insects first, then spiders will have nothing to come after.

They can also be attracted to trash cans so keeping your trash can lid shut and cleaning the area regularly will reduce their population.

Does killing a spider attract more?

No evidence killing spiders will attract more of them. However, there is a scenario that can call for more spiders.

When you spray or kill a spider, it becomes a dead carcass that may attract other insects. The presence of these insects, like ants, may then attract another set of spiders.

Is deodorant/aerosol a cruel way to kill spiders?

No, there is no cruel way to kill spiders.

All you want is for them to die and to do it fast. As long as you’re eliminating them, you shouldn’t have any issues as that is the end goal anyway.

What Can I Spray on a Spider to Kill It?

Fortunately, there are a lot of chemicals you can spray to kill spiders. I’ve covered most of what you need above.