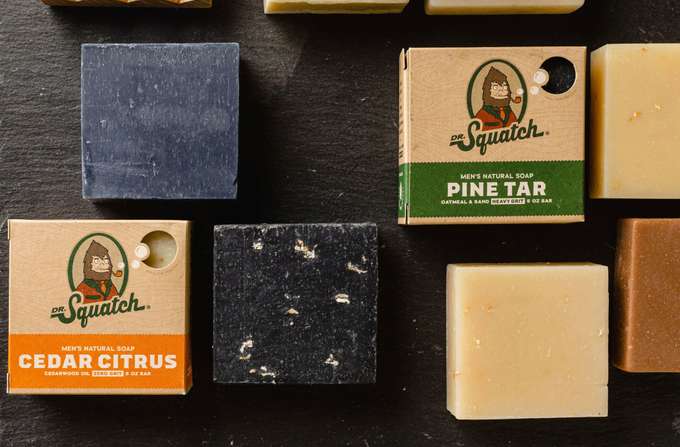 If you spend any time on Instagram or TikTok, you’ve probably run into those odious ads for Dr. Squatch soap.

You probably know something about how the ads have been vilified for their relentless bro culture and the gendering they embody.

You may have even looked for reviews of their soaps trying to find the one that smells the best, and if that’s the case you’ve likely discovered that there are tons of products from which to choose.

But what’s the best-smelling Dr. Squatc soap? Let’s break it down and take a closer look, and in the process, we’ll try to give you a definitive verdict.

There are also plenty of possibilities when it comes to selecting the best smelling Dr. Squatch soap.

In this section, we’ll be looking at the following scents from Dr. Squatch

And they all have cool names, of course. The one you’ll see at or near the top of most lists is Alpine Sage, which used to be known as Nautical Sage.

There’s a reason Dr. Squatch didn’t lose the word “sage” when they changed the name. The natural oils in this particular soap are cypress, lavender and clary sage, with emphasis on the sage.

The good news is that the scent itself is light, which is part of what makes it such a good candidate for the best smelling Dr. Squatch soap.

The Alpine Sage is one of the most loved scents from Dr. Squatch.

What does it smell like? The brand says it smells like a “warm mountain breeze”, which will make anyone calm and restful. Of course, if it actually smells like it.

It contains clary sage essential oil, which helps minimize the irritation of the soap on the skin.

It is also good for the overall health of the skin. Alpine Sage also contains the signature Dr. Squatch ingredient, sea salt, which is an exfoliant.

This substance grabs dirt, grime, and excess oil in the skin so the pores on the skin open up and also prevents the blocking of the pores.

Like the many Dr. Squatch soaps, the Alpine Sage also smells great. However, some customers have complained that the scent doesn’t last outside the bathroom.

So, you enjoy all the scents during your shower. Also, the soaps, including this one, all weigh less than the 5 oz that the brand claims.

So, if you buy a full pack of 10 bars, you’re paying almost 10 dollars and missing two full bars, which is a bit disappointing considering the price of the bars.

It seems that only the Pine Tar and the Gold Moss measured to the full size.

If I’d say anything Dr. Squatch need to improve here, it would be to increase the size to be 5 oz they claim and that it shouldn’t be as expensive.

Another Dr. Squatch soap. It’s in fact, the no. 1 on most lists. Was it propelled by ads or it just works? Well, the reviews say it’s the latter.

Trying it yourself might be the ultimate answer. But what is the Pine Tar all about?

Arguably, the most popular and best-selling Dr. Squatch soap. When the brand just came out, this is one of the soaps that people want to use because of how good it smells.

Like many of their products, it’s manufactured in the United States, with all-natural ingredients.

It is enriched with activated charcoal (which helps detoxifies the skin), sand (for exfoliating the skin), and oatmeal (which is a natural exfoliant too).

These ingredients are supposed to work together in tandem to create dislocate dirt from the body, open up the pore, and peel off dead skin cells so you can feel relaxed and relieved.

Other ingredients in the scent include:

What made this scent popular is how good it smells. The package even has a small hole on it, where you can easily smell and feel what it smells like before you start using it.

According to Dr. Squatch, the Pine Tar was created to rescue men from low-quality soaps that are manufactured with harsh chemicals.

So, you’re supposed to be getting something that’s handcrafted with the finest natural ingredients, from nature, to serve your skin all the good it craves.

What Others Are Saying

If you check the product reviews page on the product on Amazon or the Dr. Squatch website, you’ll see it has good reviews.

However, the price is a little over the top. But then, if you’re looking for a quality product, you either have to subscribe to Dr. Squatch or get some other much cheaper but quality ones from similar brands.

The most important thing is that the soap lathers well and cleanses just the way it says, and basically smells great.

It’s 9 dollars, like other bars from the company and you can purchase it on Amazon, the brand’s website, or elsewhere.

It features Dr. Squatch’s earthly oak scent with zero grit. Unlike the Pine Tar, this doesn’t have any exfoliation, which means it just cleanses the skin and does not increase the turnover of dead skin skins.

However, if you’re looking for a skin softener that’ll make your skin soft and supple, you may want to try this.

It contains Shea Butter and Olive Oil, both abundant in vitamins and antioxidants, and fatty acids that help nourish the skin and kill free radicals that may damage the skin.

It is available in the usual 5 oz size and has a nice scent.

As with other soaps from the brand, it’s very small even though it’s a quality product.

So, if you’re looking for a soap that won’t get exhausted in a couple of weeks, you may have to look for another brand.

Fortunately, there are a lot of alternatives with quality bars at lower costs you can look into.

Other Alternatives Worth Considering:

As you can see, there are definitely a lot of options if you don’t like this scent or any of the others from Dr. Squatch.

The Bay Rum is actually one of the best-selling Dr. Squatch soaps. In fact, it’s often ranked first or second, only to the Pine Tar.

Like many other Dr. Squatch soaps, the Bay Rum is a natural men’s soap molded in a 5 oz size and ready to give you the scent of the Island tropics and spice.

The soap is enriched with Cedarwood essential oil and Fir Needle essential oil, which form the scent of the Bay Rum.

It also Shea Butter, which contains a lot of skin softeners to keep your skin soft and hydrated.

Like the other bar soaps from Dr. Squatch, this one also comes in 5 oz, which you can order from the website. It’s moderately scented and should be suitable for both men and women.

What Are Others Saying?

From a couple of user reviews, it seems that the Bay Rum doesn’t have that stint, or spice, as you would expect in the soap.

The soap has a creamy lather, which makes it wears down fast. This means it’ll get exhausted faster. A couple of users have noted this as well.

If you’ve ever used other aroma soaps, you’d know that this doesn’t last as much and that would make it easier to compare.

One thing that the Bay Rum has is that the scent is strong enough to deodorize the whole bathroom, just make sure you close the door.

The advantage is that it helps you enjoy the showering and makes the fragrance lingers on for a while before vanishing.

You probably might want to be taking double showers every day to experience it.

You can basically shower with it before going to sleep to give you that lovely calm as you expire into the night. That, though, will be an expensive experiment.

How does it compare to the Bay Rum from the Soap Guy?

Given that they have the same ingredients, it would mean they should smell and perform the same, right? There is no definite answer to this.

Most people are only used to Dr. Squatch and may not actually have the experience of testing the one from The Soap Guy to be able to compare them.

However, there are some users who have tested a couple from The Soap Guy only to find that they don’t smell just as well as the Dr. Squatch ones.

However, this is something to consider. If you don’t know anything about The Soap Guy, you can read my review and comparison with Dr. Squatch here.

Cool Fresh Aloe is another strong candidate. It’s a summery smell that’s also light, and the benefits of aloe for skin are widely documented in a wide array of products.

The one criticism of this particular bar is that it melts very quickly, and given some of the criticisms that have been leveled at Dr. Squatch it’s hard for cynics not to think this might be by design.

Planned obsolescence is still alive in many businesses and products, and given Dr. Squatch’s poor rating with the Better Business Bureau.

A tactic like this wouldn’t exactly be surprising, especially considering that these are luxury products that hit the wallet rather hard.

It’s hard not to love any soap with the word “eucalyptus” in the title, especially if that product delivers the goods.

The reviews of this particular soap are strong in that regard, and the Greek yogurt part is less off-putting because it’s included as a moisturizing agreement.

Ugly name, especially if you’re a baseball fan of a certain age who remembers George Brett, but the scent itself is great.

It’s got a couple of exfoliation ingredients, oatmeal and sand, and while no one really wants to think much about that combination. the fact that this bar has staying power is yet another plus.

So what’s the call when it comes to the best smelling Dr. Squatch soap? It’s subjective, of course, and opinions vary all over the map, but the safe call is Nautical Sage.

We won’t hold the name change against the company, but with all the complaints that have been leveled against Dr. Squatch, we would suggest you hold tight onto your wallet until you’re sure you know what you’re getting yourself into when you buy these products.

Up Next: Dr. Squatch Controversy: What is it All About?